A Personal Remembrance of Paul Farmer

Dr. Paul Farmer, who passed away on Monday, was one of those rare individuals whose service to humanity came to embody the noblest aspirations of an entire generation. He was a true visionary who was instrumental in creating Partners in Health (PIH). In the process he also nurtured and empowered an extraordinary team of medical professionals who will now continue working for justice in health care for the millions around the world for whom that is not a reality. 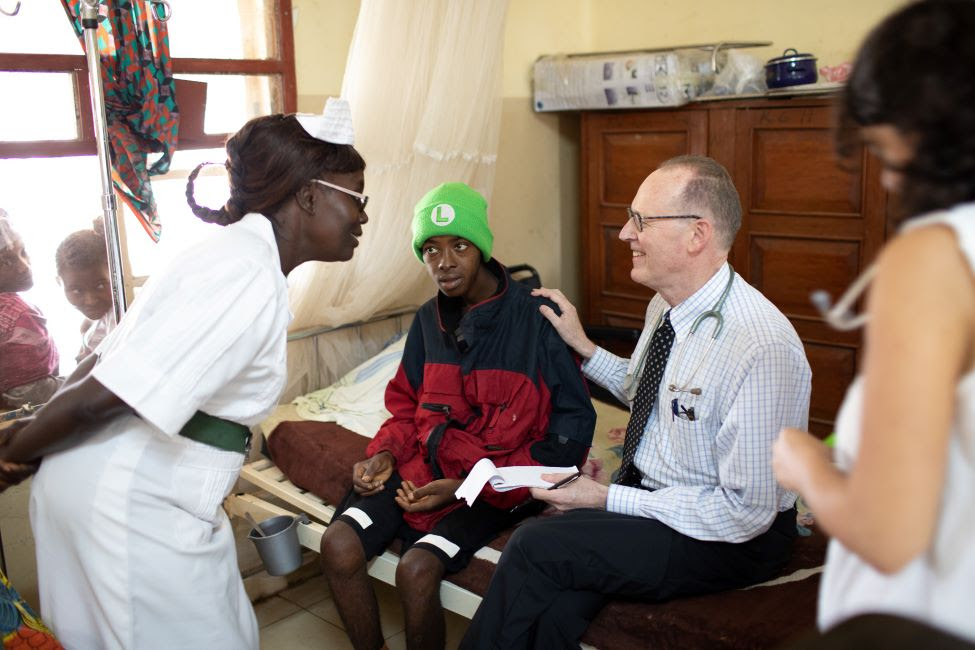 Dr. Farmer talks with a nurse and a patient at the Koidu Government Hospital in Kono District, Sierra Leone. Photo by John Ra / Partners In Health.

Part of what made Paul so effective was that his vision was balanced by a rigorous pragmatism and attention to detail. We came to know each other through our respective work in Haiti, and I would like to share one example of his pragmatism in action.

I called Paul around 9:00pm on October 22, 2010 and was embarrassed to have reached him in the middle of the night in Rwanda. He assured me it was ok because he was up anyway and helping to coordinate the initial response by Partners in Health (PIH) to the rapidly escalating cholera pandemic that had just broken out in Haiti’s Artibonite Valley. I had called him to ask if there was anything the Yéle Haiti organization could do to help out, as I was then its president.

Paul explained that PIH was looking for a source of fresh water because local sources had been contaminated and were in fact spreading cholera. As it happened, Yéle was using a fleet of 14 tanker trucks to deliver a total of 34,000 gallons of clean water a day to various tent camps that had sprung up in Port-au-Prince following the devastating earthquake there in January of 2010.

I explained that we could divert half that amount, or 17,000 gallons a day, and deliver it to the Artibonite Valley on instructions from PIH. At that point I assumed it would take a few days to get the logistics in place. But Paul asked that I call him back in an hour, which I did.

In that short interval he had set up the whole operation with his team in Haiti, and before midnight they had sent me a list of PIH representatives and local nurses and doctors who would meet the trucks at several different coordinates the following morning. I relayed this list immediately to the Yéle team and by noon on October 23rd a fleet of trucks left Port-au-Prince traveling north in a convoy. One by one the trucks veered off to meet their respective health professionals and then be guided to their final destinations nearby. The trucks were met with applause from people for whom this was the first clean water to arrive since the outbreak.

Over the course of the next month and a half, PIH sent a list before midnight each day and the following morning the convoy headed north. The destinations varied, sometimes as many as 10 different locations, but always there was a grateful doctor or nurse waiting to meet each truck and guide them to various makeshift emergency cholera treatment centers nearby. The volume of water we delivered was reduced by half for an additional month, but the whole operation ran from the start on Paul’s original plan that had taken him an hour to put in place remotely from Rwanda.

I cannot recount this story without mentioning the Yéle team that accompanied the water trucks. At the outset they were frightened, as was the whole country. Rumors were spreading that the disease was airborne. This was not accurate, but people were panicking. To their credit, the Yéle team donned face masks and rubber gloves and did not hesitate to go into the infected area.

I should mention that Paul also had a good sense of humor, and some time later we had a good laugh about one particular detail of the water operation.

The first convoy had been ready to head out at dawn on October 23rd, but they were delayed because it was reported on the radio that the main highway leading north from Port-au-Prince had been closed by the government in order to quarantine the outbreak. Other reports indicated that only vehicles with a government-issued travel document, known as a ‘laissez-passer’, could get through.

At that point I used my laptop to create a very official looking laissez-passer replete with the logos of the Haitian Ministry of Health, Partners in Health and Yéle. Once that was printed and taped to the windows of each water tanker, the fleet was on its way and were waved through the barricades that day and for the months that followed. I later apologized to Paul for using his logo without permission, at which point he put his arm around my shoulders as we both laughed.

I will miss you, my friend.

To learn more about DECO’s work with Smallholder Data Services to incentivize and reward regenerative agricultural practices among small parcel farmers in Haiti, check out the Lydion Magazine’s Turning Earth Into Gold.