THE SCIENCE OF VALUE

The measurement and expression of value is a problem that has fascinated people for a very long time, since it relates to a fundamental human need: to trade objects, labor, and ideas.

To enable trade, the values of all objects, labor, and ideas involved need to be measured in units expressed in a common language understandable to all involved in the trade.

Further, such units—currency or other financial instruments are typical examples—are not just used to measure the value of things involved in a trade, but are also used to represent a proxy for such value in transactions.

Defining and constructing such units of measurement is difficult. It is even harder to get a significant group of people and organizations to recognize such a unit as the basis for measuring the value of things that have a direct impact on their lives and goals.

But when a large enough group of entities does end up agreeing upon such a unit of measurement, something borderline-magical happens: The ability to measure and be proxies for the value of other things makes these units of measurement themselves inherently valuable.

To grasp this intuitively, imagine what the “value” of a dollar bill or a gold coin is. The dollar bill can be used to measure the value of other things, and as a result of that use (or utility), the dollar bill itself becomes valuable. The value of the dollar bill is measured by itself. This fact is so obvious to anyone alive today that it’s easy to overlook the elegance and implications that lie underneath.

At the root of the science of Data Economics is the observation that all possible means of measuring and expressing the value of things (and ideas) can be modeled as packages of data (or information) expressed using a specific language.

Modern fiat currencies are simply units of data representing units of credit held with the issuing government. Hard currency such as a gold coin is a package of data made of physical atoms acting as a proxy for the work done to extract and mint the gold used. Similarly, everything else used to “pay for things”—from cryptocurrency to credit card miles to a loyalty card for a local coffee shop that can be redeemed for a free coffee—consists of uniquely identifiable packages of data.

We pay for things with data all the time. The form and identity of such data is typically designated by a central authority such as the United States Treasury, a credit card company, or a local coffee shop.

Unlike any other period in human civilization, we now have the means of capturing and storing almost everything that affects our lives, work, and goals with precision, ease, and efficiency in the form of digital data. The amount of digital data being captured and generated by an individual with a cell phone simply going about their lives would likely surpass the wildest expectations of someone from even a century ago.

The question at the heart of Data Economics is therefore a somewhat obvious one - How can the digital data that each of us—people and organizations—is generating be used to pay for things? Can digital data, generated from different sources, for different reasons, and “owned” by different people and companies, be used to mint products that measure the value of other things and that can be used as a proxy for that value in transactions in the same way that physical currency has in the past?

The ability to measure and transact economic value using products created from ordinary digital datasets has far-reaching implications across every aspect of human life and our relationship with the world. Understanding these implications and enabling the creation of valuable products from raw digital data is therefore the motivation for the entire discipline of Data Economics.

The materials below are designed to give readers a guided tour into the discipline of Data Economics, starting with the basics before expanding on key concepts. We hope that you enjoy the journey and join us in exploring this fascinating new universe together.

A comprehensive introduction to Data Economics science, Lydion DEOS technology – including an appendix with a high-level look at the Lydion DEOS architecture– and how products called Lydion Solutions that power Data Economic Networks (DENETs) are created using the Lydion DEOS being developed with enterprise and academic partners.

This deck is also a good companion to the Introduction of Data Economics textbook and contains detailed diagrams illustrating the key concepts introduced in Chapters 2 to 5.

The Introduction to Data Economics series of papers is designed to introduce the concepts driving Data Economics and Lydion technology to readers of varying interests, expertise, and technical backgrounds. The latest versions of the first three chapters of the series are available below, along with a companion deck of explainer diagrams and slides that illustrate the various concepts discussed in these chapters. Data Economics is a nascent science, and along with releasing new Chapters to the Introduction to Data Economics series, the DECO team will also release updated versions of previously-published chapters incorporating feedback and learning gathered from the Lydion Insider community of academic and industry partners.

Chapter 1: On Value, Outcomes, and Data

“Chapter 1: On Value, Outcomes, and Data” explores the roots of Data Economics: the growing need for the expansion of the language of expressing and communicating value to address the “big” challenges and opportunities we face, and by extension the need to expand the frameworks offered by the field of economics.

In “Chapter 2: Fundamental Concepts”, we outline and summarize the fundamental concepts driving Data Economics and the Lydion DEOS as a starting point for further exploration of Data Economics and Lydion technology, as other more advanced papers will often refer back to concepts first introduced in this paper.

In Chapter 3 of the Introduction to Data Economics series, we explore the “Mixed” and “Pure” Data Economies along with real-world examples for each type that help build intuitive understanding of Data Economic Frames and other key concepts.

Chapter 5: Introducing the Lydion DEOS and its Functions

Unlike physical atoms and molecules, digital data has no form, function, or inherent meaning until such meaning—or context—is imposed upon it by digital programs that can process the data as input and describe its meaning as outputs. As a result, there are many methods, each a Data Economic Methodology, to define the context, utility, and evaluation rules that turn raw digital data packages into useful and valuable products.

Credit card miles, cryptocurrency, or digital loyalty cards are all products constructed using a specific Data Economic Methodology, implemented by a technological platform or combination of systems enabling people and organizations to construct, trade and utilize the digital data-based product. Any such technological platform is a Data Economic Operating System - or DEOS.

The Lydion Data Economic Methodology, implemented by the Lydion DEOS, explores potential of digital data to act as the building blocks for a new kind of economy, one where the data being generated and sourced by its participants would act as the markers for expressing, communicating, and transacting utility and value. The Lydion DEOS captures the value and resultant utility of such work done using packets (or quanta), of data called Data Assets.

Using digital applications and networks created using the Lydion DEOS, participants can design economies where they pay with units of digital data that they themselves generate through the outcomes of work performed in the real-world, as opposed to with scarce units of data (such as currency, credit card miles, or loyalty cards) generated and controlled solely by external entities.

The Lydion DEOS, through the Lydion Methodology, can use any piece of data, from any datasets or streams generated through work done by economic participants anywhere in the world, to create products called Data Assets. Participants in a Lydion Data Economy can use Data Assets to pay for things, sell or license them for money, or otherwise utilize them in Data Economic Transactions, all without losing control or ownership of the underlying datasets.

Along with developing the Data Economic science and the Lydion DEOS, DECO is working with enterprise, policy, and academic partners to build Data Economic Solutions - software solutions that address large-scale, high-impact opportunities and challenges across social and commercial enterprise as well as academia. Early Solutions were prototyped on the internal-only Lydion DEOS v0.1, while production-ready Solutions are being developed on Lydion DEOS v0.2, to be rolled out over 2021 and 2022.

The Lydion DEOS v0.1 Architecture Summary contains diagrams and associated slides that discuss the basic architecture of a Lydion Data Economic Application (DE-APP) and the components that make up the Data Asset Markets (DAMs) and Networks (DENETs)

The Transactionally-Minted Workchain (W-chain) patent application translates the basic “Workchain” data structure driving Lydion DEOS and its implementation and application methodology into a series of claims that forms a part of the overall intellectual property stream being developed around the Lydion DEOS. Note that this draft is undergoing heavy updates, but is published for Insiders as a companion to the Lydion v0.1 Architecture Summary.

The Lydion DEOS v0.1 Insider Demo will contain demonstrations of features from the Lydion Outcomes-based Contracting (Data Economic Solution) Platform used to implement distributed outcomes-based contracts in biopharmaceuticals and health care delivery. Alongside demonstration of that use case, the demo highlights some of the core functionality of Lydion DEOS v0.1 and provides visualization of how Data Assets are built “behind the scenes.” 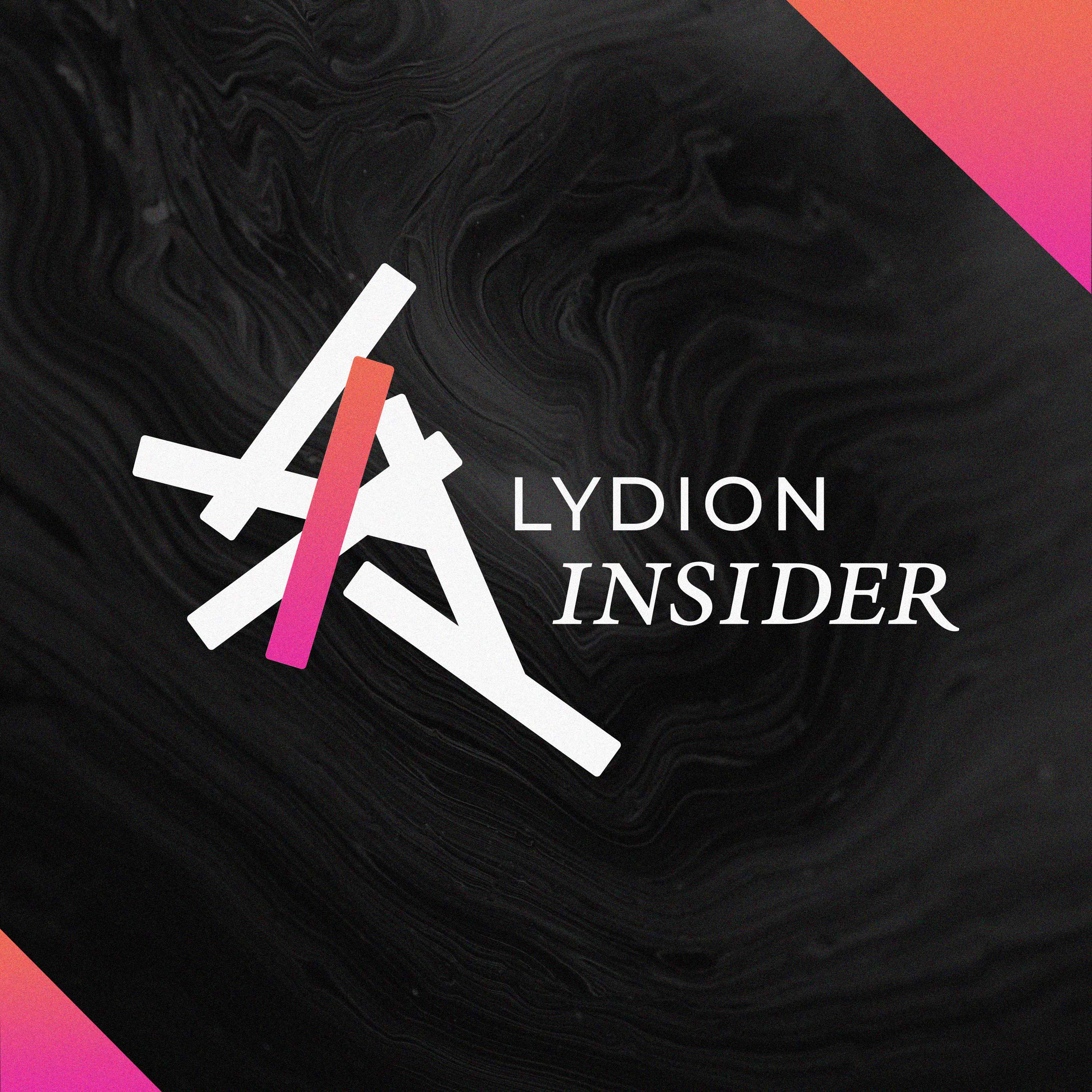 UNLOCK THE LYDION WITH LYDION INSIDER

Go beyond The Lydion with a Lydion Insider account that gets you access to a wealth of materials, research, product previews invites to DECO-Hosted Events that are only available to Lydion Insider members comprising DECO’s partners and collaborators across industry and academia. To get the full picture around Data Economics, the Lydion DEOS technology, we invite you to join Lydion Insider; it takes just a few seconds to request access.

ABOUT THE DATA ECONOMICS COMPANY (DECO)

DECO started off as a research collaboration, and has now become the leader in Data Economics science and commercialization through its Lydion Data Economic Operating System technology. Through building Data Economic Solutions on the Lydion DEOS with innovative partners across industry segments, DECO fuels the spirit of the scientific collective and translates this energy into high-impact products for enterprise, communities, and individuals.

The DECO team and research alliance partners have been actively publishing and presenting on core concepts and proposed applications of Data Economics since 2018. Highlights from presented research at academic and industry conferences are below.

“Proposing and Evaluating a Design for GDPR-Compliant, Scalable Technology for Automatic Adjudication of Risk-Sharing Agreements”

The DECO team and its industry partners are using the Lydion DEOS and DE Solutions Toolkit in the real world to address high-impact challenges across multiple sectors. Explore the Solutions in development as well as DECO’s process for prioritizing and advancing the development of new Solutions.